How the Wizards Can Take Game 7

The Washington Wizards have shown their playoff inexperience throughout this year’s playoffs. The most obvious supporting fact to this claim is the Wizards inability to play well on the road. For the Wizards to win this series against the Boston Celtics, they must complete a task that they have failed to achieve this entire season: Win at the TD Garden. Here is what the Wizards will have to do to increase their chances of winning Game 7. All-Stars to Superstars John Wall and
Kyle Zwiazek

Not Just Another Brick in the Wall

Think back to 2010, for some of you that may feel like a lifetime ago, but for most of you it feels like just yesterday. 2010 was the year, John Wall fresh out of the University of Kentucky decided to quote the great Pink Floyd and say, “We don’t need no education”. He left college after one year with sights set on being the first overall pick in the NBA Draft. Since the NBA rule change banning players from entering the NBA Draft right out of high school, there has been an in
Kyle Zwiazek

The Washington Wizards and Their Miraculous Runs

The NBA is the premier basketball league in the world. All of the top players come to America to play the game created by James Naismith. As the best league in the world, any team should be able to defeat any other team on a given night. That idea is holding true in some of the NBA playoff matchups but in some it is not. The fact that LeBron James and the Cleveland Cavaliers have not lost a game in the playoffs is a little ridiculous. This means there is not really a balance
Kyle Zwiazek

What Switched on for the Wizards in Game 3?

Basketball is a funny sport, there are times when teams look lost out there and then there are times when teams look like the best team in the world. Luckily for the Washington Wizards, they looked really good in Game 3 against the Boston Celtics. What changed for the Wizards in Game 3 compared to the other two against Boston? Familiarity Never discredit what a home-court advantage gives to a team. Game 1 and 2 were in Boston where the Celtics players were able to sleep in th
Kyle Zwiazek

What Went Wrong for the Wizards in Game 1?

The second round of the playoffs are underway. With the first game in round two, Isaiah Thomas and the Boston Celtics took on John Wall and the Washington Wizards. This series is full of storylines, but for this article we are going to focus how the Washington Wizards blew a 17-point lead and lost Game 1. The Wizards came out running on all cylinders in the first quarter and started the game with a 16-0 run, so what happened? Well first, Markieff Morris went down with a reall
Liam Griffin

In the first round of the Eastern Conference Playoffs, the Washington Wizards will be taking on the Atlanta Hawks in the four-five match-up. The Hawks are making their tenth straight playoff appearance, while the Wizards are making a return to the playoffs for the third time in four years, after missing the postseason in 2016. This will be the Wizards first playoff series since being eliminated by the Hawks in the Eastern Conference Semifinals in 2015. Key Matchups While the
Liam Griffin

Earlier this week, the Washington Wizards clinched a playoff spot; and last night, with a win over the Los Angeles Lakers, they clinched a division title. There is zero doubt in anyone’s mind that the Wizards are in this position because of the stellar play and leadership of John Wall. This season, everything has come together perfectly. John Wall has reached a point in his development where he’s an effective leader on and off the court; he’s setting career highs in a variety
Liam Griffin

The Wizards and Celtics Are the Future of the Eastern Conference

The Washington Wizards and Boston Celtics squared off for the final time this regular season, with the Celtics taking the win at home, 110-102. With the loss, the Wizards’ push for the second seed in the Eastern Conference becomes that much more difficult, as they now trail the Celtics by two and a half games for the second spot. They also have just a one game cushion over the Raptors for the third seed. In addition to postseason seeding implications, the game between Boston
Liam Griffin

A Look at the Wizards' Deadline Moves

The Washington Wizards have been steadily gaining ground in their push toward the top of the Eastern Conference standings. However, despite the All-Star play from the backcourt combination of John Wall and Bradley Beal, the team is less than perfect. Unfortunately, your starters can only be on the court for so many minutes; this isn’t a 2K franchise, and you can’t just turn off the fatigue setting. So, there were moves to be made at the deadline. The Wizards starting five hav 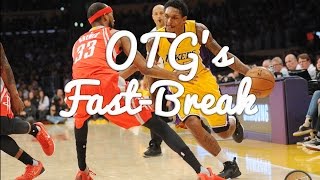 OTG's Fast-Break: Bogdanovic to the Wiz/Lou Williams to the Rockets

Nick Fay and Harris Wichard discuss the recent trades between the Washing Wizards/Brooklyn Nets and Los Angeles Lakers/Houston Rockets. The two discuss the impact the Bojan Bogdanovic and Lou Williams can have in their new homes, as well as the future of the Nets and Lakers. #NBA #NBATrades #podcast #Podcast #Nets #Lakers #Rockets #Wizards
Liam Griffin

Why the Wizards Are a Threat in the East

The Washington Wizards have quickly and quietly become one of the top teams in the Eastern Conference. However, this sudden success can be attributed to more than the All-Star caliber play from John Wall and Bradley Beal in the backcourt (although they have played a role). An energy surge has grabbed hold of the organization and this team has caught fire, and they don’t seem to be cooling down anytime soon. John Wall and Bradley Beal make up one of the top backcourt combinati
Albert Roman

The Washington Wizards are currently sitting in the fifth spot of the Eastern Conference with a 21-19 record. Despite having one of the best backcourts in the league in John Wall and Bradley Beal, the Wizards always remain stuck in the abyss of the Eastern Conference. Things have certainly looked up for the organization known as the Chicago Packers, when founded in 1961. After moving from Chicago to Baltimore the team found a home in Washington. From 1974 through 97 the team
Philip Guay

Who said Merry-Go-Rounds can’t be fun for adults? Well if you’re an NBA coach it might not be, but for us at Off The Glass they sure are. Le 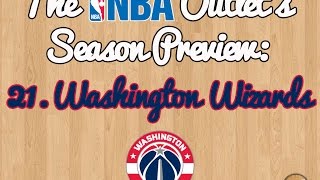 OTG’s Nick Diesing-Fay and Harris Wichard breakdown the New Orleans Pelicans going into the 2016-17 NBA season. The two look at the team's a
Russell Schmidt

New Orleans Pelicans: The Pelicans are lucky to have Anthony Davis. If I could start a franchise with one player it would probably be either Davis or Karl-Anthony Towns. At the very least he would be one of the few players up for consideration. The only real concern with Davis is the fact that he has missed between 14-21 games with injuries in each of his four seasons. On the court Davis has no weaknesses; he is just 23 years old, can score inside and outside, protect the rim
Russell Schmidt

Washington Wizards: The past couple of seasons the Wizards looked like a team ready to contend with an interesting combination of young players and veterans. During this time frame the Wizards were very careful to preserve cap space for this offseason in order to convince D.C. native Kevin Durant to join the team. Fast-forward to today and the Wizards’ plan completely backfired. Last season the Wizards regressed on the floor and failed to make the playoffs, leading Durant to
Joe Keller

*Photo via Ocanada.com As we near April the Eastern Conference playoff picture is still very unclear. The Cleveland Cavaliers and Toronto Raptors are the only two teams that have already clinched a playoff spot in the conference, and they are near locks to finish as the first and second seed in the East. Cleveland currently holds a 2.5 game lead over the Raptors for the conference’s top seed. Next we have a four-team battle for the 3-6 seeds between the Atlanta Hawks, Boston
Joe Keller

What's Wrong With the Wizards?

*Photo via Washington Post Through the first month of the season one of the biggest surprises is the struggles of the Washington Wizards. The Wizards earned the fifth seed in the East last season and made a strong playoff push, dismantling the Raptors in a sweep and taking the number one seed Atlanta Hawks to six games. The Wizards were looking to build off another strong postseason run and try to get out of the second round this year. However with the way they’ve been playin
Kory Waldron

Top Play: Standings: 1. Atlanta Hawks (7-2) 2. Miami Heat (4-3) 3. Washington Wizards (3-3) 4. Orlando Magic (3-5) 5. Charlotte Hornets (2-4) Atlanta Hawks *Photo via AJC After dropping the first game of the season to the Detroit Pistons, The Atlanta Hawks have found their groove, currently riding a seven game win streak. On this streak, they’ve had four divisional games, two against the Hornets, then the Heat and the Wizards. The Hawks have remained true to last seasons form
123
4
5