Well, it has finally happened, we saw the Oklahoma City Thunder play a game without Kevin Durant. Russell Westbrook, as expected, was amazing and put up Russell Westbrook numbers, but some things weren’t as one would have imagined. Heading into the final quarter, the Thunder found themselves down six to the Philadelphia 76ers, a team that was supposed to be awful this season. The Thunder would eventually win the game by 6, but it was down to wire despite the fact that Westbro 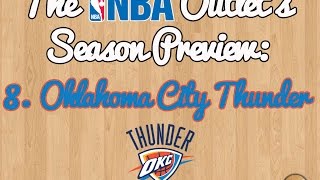 With the start of the regular season looming, Oklahoma City Thunder fans are left wondering who can we count on now? With the departure of 29-year old franchise player Kevin Durant, many in Oklahoma City are still in disbelief that the seven time NBA All-Star jumped ship and headed to the Bay Area to join forces with Stephen Curry, Klay Thompson and Draymond Green. Hopes for a championship rested squarely on the shoulders of Durant who had previously been a consistent contrib
Nick Vigliotti

Russell Westbrook Looks to Lead Thunder Into a New Era

We can finally get rid of all the speculating about Oklahoma City’s near future thanks to Russell Westbrook. Westbrook agreed to a maximum level extension with the team on August 4, after the Thunder rescinded their offer to Dion Waiters in order to make space for the max offer. After Kevin Durant’s shocking departure to the Golden State Warriors , the focus immediately shifted to Westbrook and whether he would stay in OKC or leave in his free agency, which was set to take pl
Russell Schmidt

Los Angeles Clippers: Doc Rivers may be a well-respected coach, but thus far he has proven to be an awful general manager. Rivers has entirely ignored acquiring and developing young players in many desperate and failed attempts to add the right players around his core of Chris Paul, Blake Griffin, DeAndre Jordan, and JJ Redick. The only 1st round picks on rookie deals left are CJ Wilcox, a player that has only played a few more minutes than me the past two seasons, and rookie
Russell Schmidt

*Photo via Getty Images Oklahoma City Thunder: Nearly two weeks into free agency OKC has not signed a single free agent and has only lost one player. Unfortunately, that player happened to be former MVP Kevin Durant. There is no need to overanalyze Durant’s departure. Any time you lose a top-5 player in the league in the midst of his prime (Durant is just 27) your franchise will inevitably take a huge step backward. The blame for Durant’s decision can be argued, but what’s do
Nick Vigliotti

The Rise and Fall of a Dynasty That Never Was

It was never supposed to reach this point for the Thunder. In June of 2012, Oklahoma City lost in the NBA Finals to LeBron James and the Miami Heat 4-1. The question after that series wasn’t “Will OKC ever have another chance?” Instead it was, “How many championships will they win?” The Thunder were nearing the top of their ascent to the peak of the NBA. Built through the draft, the team was led by a ‘Core Four’, consisting of Kevin Durant, Russell Westbrook, James Harden
Jared Gosule

*Photo via USA EXTRA Over the last 5 years, everything had to go exactly wrong for Kevin Durant to defect from the OKC Thunder for Golden State. They lost the 2012 NBA Finals, then James Harden was traded, then injuries set in. Despite making 4 of the last 6 Western Conference Finals, Durant’s time to be a free agent came, and he made a decision that will send ripples throughout the league and the Oklahoma City franchise for years to come. First off, let me start by saying th
Nick Vigliotti

*Photo via Getty Images In a move that will be remembered in infamy in Oklahoma City, Kevin Durant decided to leave the only NBA team he has ever played for. Durant announced through The Players’ Tribune that he will sign with the Golden State Warriors, agreeing to a 2-year/$54.3M deal, the second year is a player option. It isn’t just the fact that Durant left the Thunder after nine seasons, including one in Seattle with the Supersonics; it is the team he left them for. T
Marc Cantave

Oklahoma City Thunder (55-27) *Photo via USA Today Recap: The Oklahoma City Thunder had a stellar season last year, until they ran into the Golden State Warriors. The Thunder faced off against the Warriors in the Western Conference Finals and were one win away from advancing to the NBA Finals, but could not close the deal, even after being up three games to one. The Warriors ended up advancing to the Finals and the Thunder went home in 7. A tough pill to swallow for OKC. Free
Jared Gosule

*Photo via Deadspin Last night, the Oklahoma City Thunder made waves by trading Serge Ibaka to the Orlando Magic for three pieces; Victor Oladipo, Ersan Ilyasova, and the 11th pick in last night’s draft, Domantas Sabonis, a forward out of Gonzaga. This trade comes as a huge risk to both teams, with OKC a week away from Kevin Durant’s impending free agency and a year away from Russell Westbrook’s, and with Orlando mortgaging a lot of it’s future by trading former #2 overall pi
Marc Cantave

Will OKC's Flaws Cost Them in Round 2?

*Photo via Flipboard.com The Oklahoma City Thunder are on the verge of defeating the Dallas Mavericks in the first round and have dominated them in the process. They have beaten the Mavericks by an average of 26 points in their three wins and will look to close out the series tonight. Although the Thunder have dominated, some of their flaws have been put on display in the first round, and will these flaws cost them in the second round? Here are a few problems that the Thunder
Marc Cantave

*Photo via USA Today The Oklahoma City Thunder is (and has been for the past few years) one of the premier teams in the NBA. They are contenders in the Western Conference and this year is no different. They are currently third in the Western Conference at 44-21, and they boast two of the top ten players in the NBA in Kevin Durant and Russell Westbrook. They, along with the San Antonio Spurs, are the favorites to stand a chance against the Golden State Warriors. They have one
Paul Gilbert

What Does No KD Mean for OKC?

* Photo via USA Today Kevin Durant is out again, this time for good. In what could be his second to last season in Oklahoma City, the loyal fans that love him only got to enjoy 27 games of Kevin Durrant. Holding a three game lead over New Orleans with ten games left for the 8th seed, two questions come to mind regarding the absence of OKC's star player for the remainder of the season: Can the Thunder still make the playoffs? and if they do, is there any hope for a playoff run
12
3
bottom of page