Teams Being Slept On

ClutchPoints Every year, a handful of NBA teams manage to surprise us; whether it be by surpassing widely-held expectations, or by flashing glimpses of eventual greatness, it tends to happen on a season-by-season basis. Of course, with 30 teams making up the modern NBA, it can often be quite difficult to predict exactly which teams are prime 'being-slept-on' candidates. That being said, there were a few teams that made the right kind of moves this summer (and last season), pu
Tyler Yates

What Should the Bulls Do With The 7th Overall Pick?

NBA.com Well, it happened again. The Bulls got the 7th overall pick in the NBA draft for the 3rd year in a row. The Bulls had a 48% chance to land in the top four picks, and obviously that didn’t happen. John Paxson, the Bulls GM, has stayed optimistic throughout the last 24 hours and has stated that he “likes a lot more than seven players in this years draft”. But that’s spin. This is a disappointing draft position, and the Bulls organization will have a big decision to make
Matt Peoples

Bulls Receive: Markelle Fultz, Wilson Chandler Sixers Receive: Jabari Parker, Bobby Portis This is an exchange of lottery tickets between two ball clubs in vastly different places as franchises. For the Bulls, they move on from the failed Parker experiment and attempt to reconcile the Fultz phenomenon. This allows Markelle a fresh start where he can be handed the reigns to try to regain his confidence. For the Sixers, they look to see if their defensive culture can put Parker
Jac Manuell

CHI receives: Brandon Knight, 2019 first round pick via HOU HOU receives: Robin Lopez Boy, oh boy, the timing of the Clint Capela injury couldn't be worse for the Rockets. James Harden has been ballin’ and his front court teammate has been the team’s second best performer in the absence of Chris Paul. That’s where Robin Lopez comes in. Lopez is clearly unhappy in Chicago. He needs a change of scenery as much as Houston needs a capable center. When Capela returns in the next 4
Alic Ortega

Via. Sports Illustrated After 24 games of his fourth season as the Chicago Bulls head coach, Fred Hoiberg found himself jobless early Monday. The Bulls front office had seen enough, preferring the guiding hand of Hoiberg’s associate head coach Jim Boylen, a member of the Gregg Popovich coaching tree and a coach under Hoiberg since 2015. But this story isn’t about Hoiberg, and it’s only a little about Boylen; this is a story of team mismanagement from the front-office down, so
Melod Askari

Cavs Nation Loddy's NBA Locks for the games played in the National Basketball Association on November 21st 2018. Locks for Phoenix Suns vs. Chicago Bulls and Los Angeles Lakers vs. Cleveland Cavaliers. A battle of two of the leagues young stars in Devin Booker vs. Zach Lavine. Two rookie big man that were drafted in the lottery in the 2018 NBA draft, Wendell Carter Jr. and Deandre Ayton will also face off. Two bad teams, so you should take the one playing at home right? I'll
Melod Askari

Boston Herald Loddy's NBA locks for the games played in the National Basketball Association on November 12th 2018. Locks for Miami Heat vs. Philadelphia 76ers, Dallas Mavericks vs. Chicago Bulls and Sacramento Kings vs. San Antonio Spurs. Who's winning the rematch of the first round of the 2018 NBA playoffs between the 76ers and Heat? Will the Bulls avenge their loss earlier in the season against the Mavericks? Will the Kings bounce back after losing to the Lakers Friday nigh
Melod Askari

CBS Detroit Loddy's NBA Locks for the games played in the NBA on November 7th 2018. Betting advice for the Detroit Pistons vs. Orlando Magic, the Denver Nuggets vs. Memphis Grizzlies, the Chicago Bulls vs. the New Orleans Pelicans and the Minnesota Timberwolves vs. the Los Angeles Lakers. Do the Pistons snap their losing streak in Orlando? Will the Denver Nuggets move to 10-1 and continue to have the best record in the NBA? Will the Pelicans cover the spread at home against t
Jac Manuell

Courtesy of NBA.com Not all free agency moves are created equally. I previously wrote about some of the best new fits for teams around the league, on the flipside, here are some of the worst. You can debate as to whether the following signings were wholly horrible yet it can’t be argued there are going to be at least some issues with how the following players fit with their new squads. Jabari Parker: Chicago Bulls Courtesy of NBA.com Financially the Bulls did fine in signing
Full Access Hoops

The Chicago Bulls went 1-2 this past week, falling to 2-7 on the year. The Bulls opened up the week with a win in Orlando against a red-hot Magic team. Everything seemed to be clicking for Chicago as they held Orlando to just three made free throws and 83 points, 32 below their season average. The Bulls also shot 48 percent from behind the arc as seven players scored in double figures. Justin Holiday led the team with 19 points, 14 of which came in the first quarter of the ga
Matthew Shear

Could Wade’s Run with the Bulls Be Over?

It was announced last week that Dwyane Wade would miss the remainder of the regular season with a sprained and fractured right elbow. The injury came during a loss to the Memphis Grizzlies after Wade got tangled up with Zach Randolph and Cristiano Felicio going for a rebound in the fourth quarter. D-Wade said he “heard a couple of pops,” during the incident. He tried to play after the mix up, but the pain became too much. An MRI the following day confirmed the severity of the
Matthew Shear

Why Dwyane Wade Fits in Chicago

The Chicago Bulls have had their ups and downs during this season, but the player that has remained their rock is Dwyane Wade. So far, Wade has proven to be a strong leader and mentor to some of the younger players on this Bulls roster. It seems that he is relishing in his new role with Chicago, and his successful transition into this team has been made possible by several players also in Chicago and by Wade’s past experiences in the NBA. Dwyane Wade has always been very good
Matthew Shear

Butler is Serving Up a Career Year

Coming into this season it was very clear that the Chicago Bulls’ players and staff all agreed that Jimmy Butler was now the leader of their team. How realistic this would be had yet to be determined. With the addition of two championship winning guards to the roster, at least one of which is a sure-fire Hall of Famer, it wasn’t clear who would truly be the leader on and off the court. But from the gate Jimmy has certainly shouldered the role of a leader for the Bulls, starti 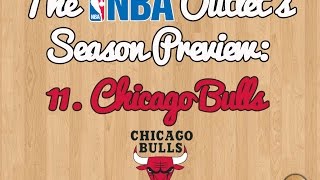 Are the Chicago Bulls in Big Trouble?

The Chicago Bulls took the 2016 offseason to completely renovate their roster. Derrick Rose, Joakim Noah, and Paul Gasol, among others, are all gone. At first, Bulls fans assumed the team was diving into full rebuild mode; however, that wasn’t the case. With plenty of cap space to work with, the team signed free agents Dwyane Wade and Rajon Rondo to join Jimmy Butler and Robin Lopez, who was acquired in the Derrick Rose trade. If this was 2010, Chicago would be looking at con
Jonathan Ebrahimi

Here at Off the Glass we’re taking on the arduous task of going through every NBA teams’ greatest possible starting five, using players that have played for that franchise. A player at each position (Point Guard through Center) will be selected, along with a 6th man who can be any position. This is how it works: Players selected must have played at least two full seasons for the franchise The selection will be based on a combination of statistics, accomplishments/accolades an
Matthew Shear

How the Bulls Can Overcome Their Lack of 3-Point Shooting

The NBA is changing, and it seems like the most successful teams are the ones who can spread the floor and shoot the three. This seemed to be the intended plan for Fred Hoiberg when he joined the Chicago Bulls as head coach last season, get the ball up and down the court quicker, and shoot more from beyond the arc. The Bulls personnel seemed to have the potential to perform this way, with Derrick Rose and Jimmy Butler taking the ball in transition and Mike Dunleavy being the
Matthew Shear

Here at Off the Glass we’re taking on the arduous task of going through every NBA teams’ greatest possible starting five, using players that have played for that franchise. A player at each position (Point Guard through Center) will be selected, along with a 6th man who can be any position. This is how it works: Players selected must have played at least two full seasons for the franchise The selection will be based on a combination of statistics, accomplishments/accolades an
Russell Schmidt