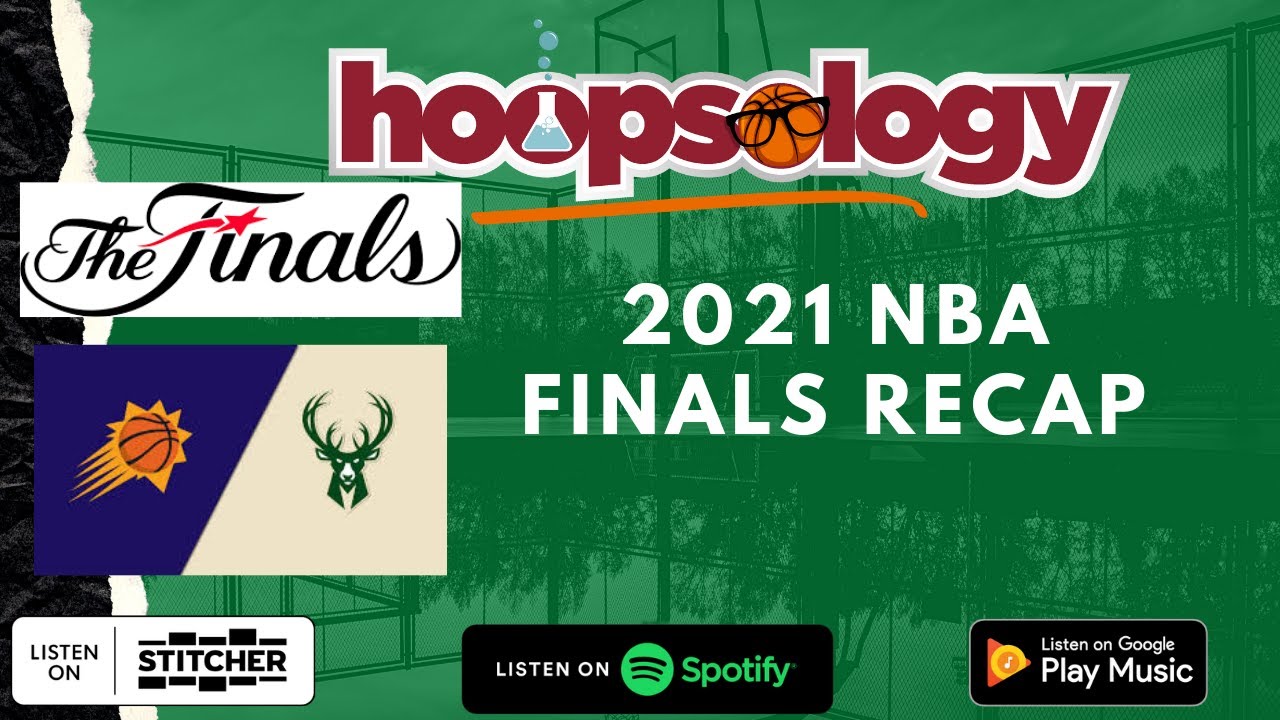 #NBAFinals #Giannis #Suns #Bucks Justin and Matt recap a historic performance by Giannis Antetokounmpo to lift the Milwaukee Bucks to the 2021 NBA Finals Title. What does the future look like for the Suns and the Bucks? What is the legacy impacts on Giannis Antetokounmpo, Chris Paul, and Devin Booker? Congratulations to the Milwaukee Bucks! Like – Share – Subscribe Be sure to check out our podcast here: https://podcasts.apple.com/us/podcast/hoopsology/id1509790773 or anywhe
Cameron Tabatabaie

Good to Great: How the Best Teams in the NBA Can Get Better

Franchise Sports The best teams in the NBA have begun to separate themselves from the pack. And with the fall of the Golden State Warriors dynasty, there’s plenty of space at the top of the basketball mountain. From Long Beach to Cream City, from H-Town to Bean Town, there are some seriously good clubs in the Association this season. But what can they do to get even better? (Stats via NBA.com) Honorable Mentions A few of your favorite teams may not have made the following lis
Cody Kluge

Forbes A little over a week ago, Bucks forward Khris Middleton suffered a left thigh contusion in a game versus the Oklahoma City Thunder. While the injury didn’t look serious at the time, a few days later Middleton would be ruled out for 3-4 weeks, leaving the Bucks without one of their most important players for an extended period of time. After a light week schedule wise, that saw the Bucks play just two games against division rivals Chicago and Indiana, the Bucks now fac
Cameron Wright

USA Today It was April 2nd, 2018. I was in Nashville for a small vacation, and I decided to get some dinner at a small sports bar just down the street from the Ryman Auditorium. I knew that Villanova was going to play Michigan for the championship, but I had no interest in the outcome. The air was thick with the smell of barbeque and the muffled sounds of a dozen musicians playing country music down Broadway Street. Through the jokes and stories being told, I looked at the T.
Cody Kluge

Should We Be Worried About the Milwaukee Bucks?

Milwaukee Journal Sentinel An above five hundred start after the first couple weeks of the NBA season is a good accomplishment for most teams. But for a squad coming off a 60-win campaign that resulted in the league’s best record last season, 2019-20 has started a bit slow for the Milwaukee Bucks. They had a nice comeback win in the season opener against James Harden and the Houston Rockets, but have since dropped a few games including the home opener to Miami, and an import
Justin Quinn

Are the Milwaukee Bucks the New Post-Harden Oklahoma City Thunder?

Hoops Hype Just days before the seven-year anniversary of the deal that brought James Harden to the Houston Rockets, a response to a question posed by an academic to the Milwaukee Bucks' marquee player ought to be giving that team's ownership considerable pause. At first glance, the connection between The Beard ending up in Texas and Giannis Antetokounmpo speaking to Harvard academics might not be so obvious, but let me explain. In a recent interview with Harvard Business Sch
Cody Kluge

Getty Images After a great season that saw the Milwaukee Bucks jump from dark horse contender to championship contender in 2018-2019, the team is set to hit the court for this year’s regular season in about a week. Milwaukee won a league best 60 games last year, and they will look to repeat that this season. A tough schedule stands in the way once again, but it is one that is full of big games and intriguing matchups. When the schedule was released in August, there were defi
Chandler Harper

Which Teams are Best Positioned to Pull off a Blockbuster Trade?

The 2019-2020 NBA season should be one of the most exciting seasons in recent memory; there is no clear favorite to win it all. There are also lots of teams who have the necessary resources to pull off a blockbuster trade that could change the landscape of the league. Here are the teams best positioned to pull it off: Honorable Mentions NBA.com Atlanta Atlanta has the necessary firepower to make a big-time trade that would shake up the East. They could use Allen Crabbe’s l
Kory Waldron/Jac Manuell

21. Draymond Green 2018-2019 Season Stats: 7.4 PPG 7.3 RPG 6.9 APG 1.4 STL 1.1 BLK PER: 12.9 TS%: 52.6% WS: 4.3 - 45/25/69 Draymond Green has changed the face of basketball. His defensive talents have caused a dramatic shift on what teams prioritise when building their defenses. He’s a once in a generation defensive talent and is an elite playmaker and floor general too. Green has been the heart and soul of the game’s most successful franchise over the last few decades. That
Cody Kluge

Benny Sieu - USA Today With just a month to go until the start of a new NBA season, it's time to take an in-depth look at each team’s roster. The Milwaukee Bucks were 60-win team last season; while the roster has stayed relatively intact, there are also several new acquisitions that will play key roles. If the new guys mesh well with the already-solid roster, and last year’s numbers prove to be more than just a mirage, the Bucks will likely be looking at another year of champ
Cody Kluge

Getty Images. Giannis Antetokounmpo has quickly become one of the league’s brightest stars in the Association. Despite being just the 15th pick in the 2013 NBA Draft, playing in a small market, and having a below average jump shot in a league that has become all about deep shooting, Giannis has transformed into arguably the league’s scariest player. Last season, he was also the league’s best. Developing every year in the league, Giannis finally showed how far he had come, ave
Kory Waldron

Via Sporting News We’ve seen Giannis Antetokounmpo improve year after year. At just 24-years old Antetokounmpo has won a Most Improved Player of the Year Award and this past season earned his first Most Valuable Player Award. Not to mention three All-Star selections, three All-NBA Team selections and two All-Defensive Team selections. The Milwaukee Bucks as a team took their biggest strides last season as they reached the Eastern Conference Finals. Heading into this season th
Khaleel Abdullah/Matt Esposito/William Jackson

Complex Pick 30: Los Angeles Lakers - Frank Ntilikina (Original pick: Josh Hart) The last (first round) pick of the Phil Jackson era in New York has not been great. Defensively is where his game shines, but his career 5.9 PPG on 35% shooting is horrendous. To restart his NBA career, why not put him in L.A. to get some bench minutes while backing up Fox. Pick 29: San Antonio Spurs - Markelle Fultz (Original pick: Derrick White) Let’s have fun. Fultz has not lived up to the hyp
Cody Kluge

Madision.com A little under two years ago, the Bucks made a trade with the Phoenix Suns to acquire a disgruntled point guard in return for a couple of draft picks and a washed up Greg Monroe. That guard was Eric Bledsoe, who wasn’t playing at the time because he didn’t want to be in Phoenix. It took a bit to adjust, but Bledsoe showed early and often he would fit well alongside superstar Giannis Antetokounmpo. While decent under the Jason Kidd/Joe Prunty regime, Bledsoe alo
Cody Kluge

Are the Bucks Still Favorites in the East?

USA Today At this time last summer, the Milwaukee Bucks, were among the NBA’s most intriguing teams. Led by an up-and-coming superstar in Giannis Antetokounmpo, it was hard to estimate the club’s true ceiling. The team went from Eastern Conference dark horse to Eastern Conference favorite, winning an NBA-best 60 wins last season.  Unfortunately, Milwaukee would fall in six games to the Toronto Raptors in the Eastern Conference Finals. Despite those results, many still see the
Cody Kluge

How Will the Bucks Replace Malcolm Brogdon?

Indy Cornrows The offseason for the Milwaukee Bucks has gone as planned thus far. Perhaps the only downside of free agency for the team has been the loss of Malcolm Brogdon, who was dealt away in a sign and trade with the Indiana Pacers. Brogdon received a four-year, $85 million contract, while the Bucks received a couple of draft picks from their Central Division foe. There is little doubt the Bucks will miss Brogdon. He was an excellent player in his three-year stint wit
Cody Kluge

USA Today After a 60-win season that fell just two games short of the NBA Finals, the Milwaukee Bucks are now in the midst of one of their most important off seasons in franchise history. Keeping their core intact has been priority number one, but the Bucks have also brought a couple new faces aboard since free agency began on June 30th. Let’s take a look at each of the moves the team has made so far, and what kind of impact it will have on the team in the 2019-2020 season. B
Alder Almo

Middleton Re-Signs With the Bucks

Getty Images What’s the deal? Adrian Wojnarowski reported that veteran Khris Middleton has decided to return to Milwaukee with a five-year, $178-million deal. Middleton, who was eligible to get $190 million max money, took less to help the Bucks bring back some of their core. What does Khris Middleton bring back to the Bucks? Middleton is coming off his first All-Star selection after emerging as the Bucks’ second best option next to the league MVP Giannis Antetokounmpo. He i
Jeremy Freed

Stadium Astro What’s the deal 2 Years, $7 million unrestricted signing with Real Madrid What is Mirotic doing? Nikola Mirotic must really miss Spain. After making his mark in the Euroleague as a springboard to his NBA career, he’s headed back with head held high, not tail between his legs. Mirotic was a bit position-less early on in his NBA career, but the downsizing of the league turned him into a prototype stretch-four. Al-Farouq Aminu got three years and $29 million -- Mir
Michael Austin

Brook Lopez is Back in Milwaukee

Flurry Sports What’s the deal? Brook Lopez and the Milwaukee Bucks have agreed to a four-year, $52 million dollar deal. The stretch five was a highly coveted role player in this offseason’s free agent class. Although they’ve lost out on Brogdon to the Pacers, it seems that this Bucks squad is trying to re-sign as many of last years roster as possible so they can run it back in 2020. What does Lopez bring to the team? Lopez’s ability to stretch the floor at the center position
1
2345
bottom of page